We envision
a harmonious,
natural, healthy
beginning in life,

where the dyad
MotherBaby
will remain safe
and functional,

with respect and awe
to the powers they possess.

Powers we keep
discovering through
experience and science,

as one more step towards
the empowerement
of our Mother Earth.

Frederick Leboyer - The Poet of Birth

[This article was written by Irena Edrovska upon F. Leboyer’s passing in May 2017 and is being published with permission from the author and F. Leboyer’s wife, in loving memory.]

"To have children . . . it is one of the greatest privileges that life holds." Frederick Leboyer

In May 2017, at the age of 98, Frederick Leboyer made his graceful exit. He was a French obstetrician who brought revolution in obstetrics in the '70s when he claimed that the baby has "rights" during birth. His first book, "Birth Without Violence", reveals the birth as seen from the baby's point of view and is being published again and again in the whole world for more than 40 years now. It has been translated into Greek, in addition to other books of his: “Loving Hands - The Traditional Art of Baby Massage”, "If Birth was Told like a Tale” (not available in English), “The Art of Giving Birth: with Chanting, Breathing and Movement”.

Frederick Leboyer was a friend of Greece, he adored the country and had been visiting every year for many long years. As invited guest from the Greek organization for natural childbirth "Eutokia", he had conducted many seminars for pregnant women and midwives in Athens and Salonica. 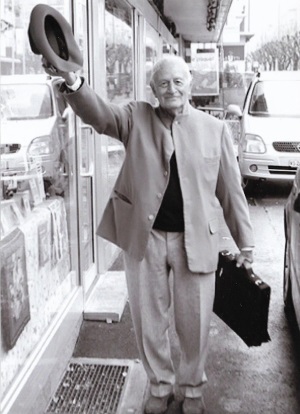 Initially his book "Birth Without Violence" had caused negative reactions among his colleagues; however, his ideas have changed the outlook of birth to a great extent since then.

The following are excerpts from an interview with him.

I. E. You had already been the director at an obstetric clinic in Paris, with years of practice and prestige, having assisted 10 000 births, when at some point you changed your standpoint about birth. What was the reason for such a turnover?

F. L. At a certain point I became aware that I had been stealing the experience from the woman and I changed everything. Women are afraid most of the time when they become pregnant and they are being brainwashed - 'It's dangerous, you must go to the hospital, you have to have all these examinations'. Because doctors are often carried away with this feeling of power, the medical power, and this power is wrong. You have to give it back to the woman and say – It belongs to you, this is your most precious secret, it belongs to you and you have to go through the experience. Birth is the woman's secret garden ... it is the time when a girl "dies" and a mature woman is being born. But this is not for everybody. There are of course cases when some women are too afraid, or there is a danger for the health of the baby or the mother - then, alright, we need some help and so on.

I. E. At the beginning of the book "Birth Without Violence", you say that if it wasn't for S. and India, this book would have never been written and you never would have had that idea.

F. L. The answer lies in meeting my spiritual teacher Swami Prajnanpad. And this meeting with this man made me aware of my past mistakes and that the way I was practicing was wrong. We never discussed the childbirth, he did not criticize my way of practicing, but simply, the relationship with him opened my eyes. I can't explain how.

I. E. It is very obvious that you write all your books in a poetic way. This was hidden within you.

F. L. Truly, this is a gift from my teacher, and the gift is that he made me a poet. All my books are really poetical writings. That's why I prefer to say that I am a poet and not a doctor. After I changed the way of my practice, I delivered 1 000 more babies and then I stopped and dedicated myself to writing.

I. E. You have been doing yoga and tai chi for many years. And you have written a book on yoga and pregnancy. On your seminars, together with some exercises from tai chi, you teach chanting, which actually belongs to nada yoga.

F. L. Yes, what we are doing is exactly nada yoga, and nada yoga means yoga of sound. The chanting is directly connected to the diaphragmatic breathing, which is the natural way of breathing, and which is very important both during pregnancy and birth. When we don't breathe properly, we are deprived from energy, and a pregnant woman needs it very much, especially during birth. The birth is a storm through which a woman should lead her ship. The woman has to remain the captain of her ship - it's that obvious.

I. E. What is the basic data concerning the birth of a new human being?

F. L.  Visualizing the birth from the standpoint of the baby and how it experiences it was a totally different approach. There should not be a strong light in the delivery room which "burns" the baby's eyes as soon as it leaves the semidarkness of the womb. Everybody in the delivery room should speak in a low voice and there should not be any loud noise, so that the adjustment to the new sounds will go smoothly. As soon as the baby is born it should be put on it's mother's belly so that there is a skin to skin contact, and to listen to it's mother's heartbeat - the familiar sound for so many months while it was in her womb. Equally important is the bath we give the baby soon after it's birth since the water is the known, familiar environment to it (as the amniotic fluid in which it lived for nine months). But, be careful, it is not a simple bath, it is immersion of the baby in the water. The touch with the water calms the baby, it is it's friend. Also, the umbilical cord should be cut as soon as it stops pulsating so that the baby can do its first breathing on its own when it is ready for it.

I. E. And what about the father? What is your opinion on his role during birth?

F. L. He has to move away. Being pregnant is like going on a pilgrimage. The woman is going on an inner pilgrimage. She is going to the spring of Life. And the man cannot follow, he cannot go there. And he should not try.

We envision
a harmonious,
natural, healthy
beginning in life,

where the dyad
MotherBaby
will remain safe
and functional,

with respect and awe
to the powers they possess.

Powers we keep
discovering through
experience and science,

as one more step towards
the empowerement
of our Mother Earth.